When discussing “wine country,” many think of Napa, Sonoma, and even Paso Robles and Monterey County. There is more. So much more. Just north of Santa Barbara, you will find The Sta. Rita Hills encompasses the small towns of Lompoc, Buellton, and Solvang. The Sta Rita Hills is part of the larger Santa Ynez Valley AVA, located between the cities of Lompoc and Buellton, with the Purisima Hills on the north and the Santa Rosa Hills on the south.

From its creation in 2001 through 2006, the wine appellation was officially named Santa Rita Hills AVA. The Formal name change resulted from a protest and negotiations with Vina Santa Rita. This substantial Chilean wine producer was concerned about the AVA name diluting its international brand value. After some talks, lawyers agreed that abbreviating “Santa” would create adequate differentiation. In January 2006, with a yearlong period for producers in the AVA to change their wine labels.

So, what makes this area so distinctive? One of the main reasons is vineyards benefit from the Pacific Ocean’s cooling influences on three sides, with the coast 16 miles (25km) away to the west, south, and southeast. The coastal valleys, formed by the Purisima Hills to their north and the Santa Rosa Hills to their south, funnel the cool Pacific breezes up through the vineyards. 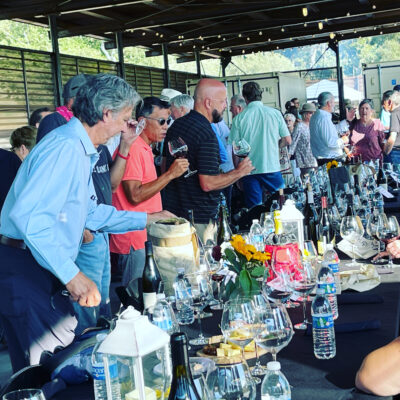 This unique ventilation reduces the incidence of fungal infections while cooling the vines down in the hot afternoon sunshine. Another notable reason, unlike virtually all of the United States’ west coast, is that no mountain range runs parallel to the sea. This unusual situation created a tectonic shift, a confluence of three moving plates making mountains on the North American plate that tore away and rotated clockwise 90 degrees. The mountain range now runs east-west and funnels, rather than block, oceanic winds. These three ranges of mountains in the Sta, Rita Hills form the shape of a trident, pointing toward the ocean. 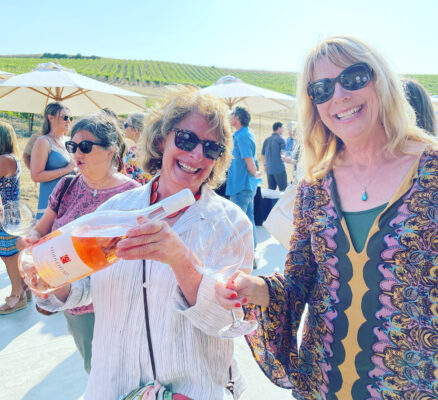 Also crucial for the region, with a latitude of 34 degrees north, Sta. Rita Hills lies closer to the equator than any European wine region. But rather than seeing an increase in temperature, as a result, the region’s maritime influences keep daytime temperatures here within bearable limits. Fog also acts as a climatic moderator, lowering the temperatures during the hot summer months. The combined effects of the ocean breezes and fog significantly extend Sta. Rita Hills’s growing season by lending its grapes extra time to develop full phenolic ripeness. Today, the AVA stands at approximately 14,000 hectares (36,000 acres). The largest concentration of vineyards ranks Pinot Noir as the premier planting. Chardonnay ranks second and is followed by smaller plantings of Syrah, Sauvignon Blanc, Viognier, and other grape varietals.

It has taken decades of dedicated planting, farming, and winemaking, but 30 years after Legendary Richard Sanford and Michael Benedict established the area’s first vineyard, the Sta. Rita Hills finally became an AVA (American Viticultural Area ). Today, the AVA includes 59 vineyards with nearly 3,000 acres under the vine. 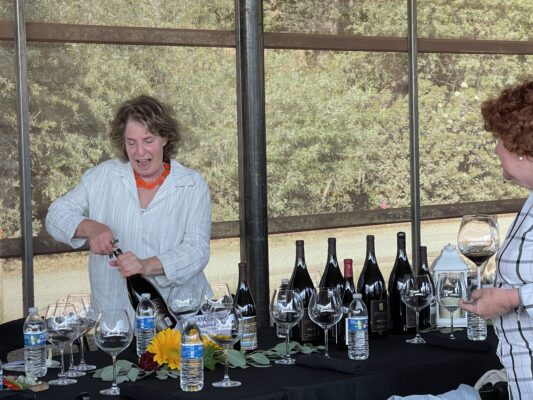 In the beginning, Sanford and Benedict had been looking for a spot to plant Cabernet Sauvignon and Riesling cuttings they’d garnered from the Uriel Nielson Vineyard in Santa Maria Valley. They settled on a 473-acre site in the very cool Santa Rita Hills, Sanford, and Benedict and became interested in growing Chardonnay and Pinot Noir. They established cuttings from the historic Wente’s vineyard in Arroyo Seco, clones Wente acquired from the Mount Eden Vineyard in the Santa Cruz Mountains.

As any vineyard owner will tell you, “We don’t tell the varietals where we want them to grow; they tell us! “Over time, it became clear the area was too cool for the style of Cabernet Sauvignon preferred by consumers. Even though Riesling thrives, it seems it is no longer Americans’ go-to white wine. Pinot Noir and Chardonnay dominate the American Palate and thrive in the Sta. Rita Hills. 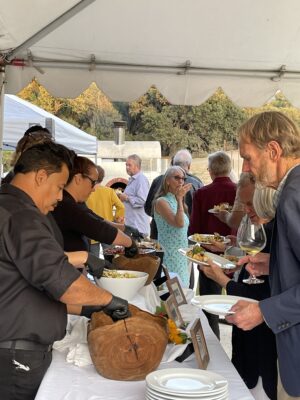 To help share the word of this exceptional area, in 1997, the founders united together to establish the Sta. Rita Hills Wine Growers Alliance. The site has since grown to highlight hospitality, superior wines, and world-class personalities.

Let’s talk varietals! The first should be Sta Rita Hills Pinot Noir. Experts and novices consider Pinot Noir to be the signature grape of the Sta. Rita Hills. The combination of climate and soils delivers a distinctive discernable character, even compared to the Santa Maria Valley, which is just north and has a similar environment. Of course, any Sta. Rita Hills Pinot will be evident from others based on vintage, site, and winemaking choices. In other words, A “Sense of Place.”

Now that we have some knowledge of this remarkable area, visiting is a must. There is a good selection of tasting rooms adjacent to many of the wineries. However, many tasting rooms have joined together collectively. They have created the Lompoc wine ghetto providing first-time wine enthusiasts or seasoned oenophiles an excellent opportunity to sample some of the area’s finest wines within walking distance of each other. It’s just west of the AVA on the outskirts of Lompoc. It takes just moments to stroll from one winery to another, trying wines that speak of the distinctive terroir of Sta. Rita Hills.

Chardonnay most clearly differentiates one vineyard from another by visiting the various wine-tasting rooms in the Sta. Rita Hills. These Chardonnays are less fruit-forward and heavily wooded in a European style of Chablis.

Syrah may be the one variety that does exceptionally well in every area of Santa Barbara County. But it is also an excellent example of showing that sense of Place, especially climate. The Syrah is inky, full-bodied, and loaded with rich fruit in the warmer parts of the county. In contrast, Sta. Rita Hills Syrah tends to be juicy and medium-bodied. The fruit is less ripe and often takes a backseat to herbs, spice, black olives, and minerals.

Last year 2021 marked the 20th anniversary of the Sta. Rita Hills received its AVA status and celebrated big time with the annual Wine and Fire event. Keep your calendar in 2023 to visit wineries and tasting rooms for the following year’s four days of festivities.

Wine and Fire events were commemorative and emotional for many who lived, worked, and visited the Sta. Rita Hills. Not wasting any time, we jumped right in and headed out to Sanford & Benedict Vineyard, Tasting at the historic Sanford & Benedict Barn. This first event focused on the first vineyard planted in 1971 by Richard Sanford and Michael Benedict in what would eventually become the Sta. Rita Hills. We walked amongst the verdant vines while enjoying wines from the founders of the Sta. Rita Hills offers us a rare opportunity to taste multiple vintages from multiple wineries that source fruit from this hallowed ground.

We could not think of a better way to start our day than indulge in The History of Sparkling Wines in the Sta. Rita Hills seminar moderated by award-winning winemaker Adam Lee. This seminar took a deep dive into how sparkling wines started in our region and their evolution over the years. Why is Sta. Rita Hills a prominent location to grow sparkling wines? How does it compare to the other areas, and why are so many producers adding sparkling wine to their line-up? Strolling from table to table, we learned history and experienced brilliant sparkling wines from the winemakers as they shared their collective sentiments. As producer TJ Barrack wrote, “In each bottle, there is more than wine; there is a memory, a story, and a feeling that is home.” Being among these respected winemakers and pioneers of the AVA, we not only felt at home, we felt part of the family, breaking bread together, sharing brilliant wines, and relishing in the story of their winemaking. 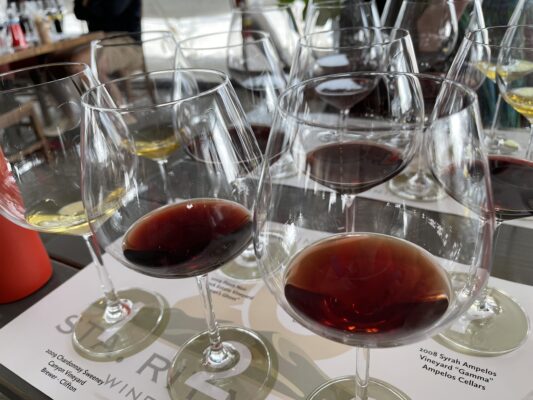 The Dinner Honoring the Pioneers of the Sta. Rita Hills-La Paulee Style got poignant on many points. Held at the renowned Alma Rosa Vineyard, this dinner was extraordinary; many of the founders of the AVA were there to break bread and share collective heartfelt memories. After a sparkling wine reception, the “Barn Party” honored the late Jim Clendenen of Au Bon Climat. Richard Sanford lamented, “Jim was an exceptional guy; he had opinions and defended them. He always had something to say and made beautiful wines from my vineyard.” Laughter and tears filled the Barn as seven Pioneer Winemakers of the region shared personal experiences about Clendenen over his long career. The program continued as we paid respect to the men and women who first envisioned the promise of the wine region and have dedicated their careers and lives to the Sta. Rita Hills.

It’s rare to experience when winemakers: Bryan Babcock, Babcock Winery, Greg Brewer, Brewer-Clifton, Ken Brown, Ken Brown Wines, Kathy Joseph, Fiddlehead Cellars, Rick Longoria, Longoria Wines, Bruce McGuire, Lafond Winery, and Richard Sanford and other area notables, come together to catch up and share stories of their trials and triumphs in establishing a world-class AVA. “This is a place to experiment; we have freedom, and that spirit is still alive today,” said Brian Babcock. Renowned grower Kathy Joseph added, “The Sta. Rita Hills is a collection of extraordinary people; there is no place in the world like it; it’s a shining star; the proof is in the bottle”. Being a La Paulee dinner, many brought bottles from the Sta, Rita Hills; they have been waiting to open and transfer these iconic wines with tablemates and friends and toast 20 years of the Sta. Rita Hills. Jim Clendenen often said over the years, winemaking in this area comes from the soul “. After spending time in the Sta. Rita Hills, you find that he was certainly right! 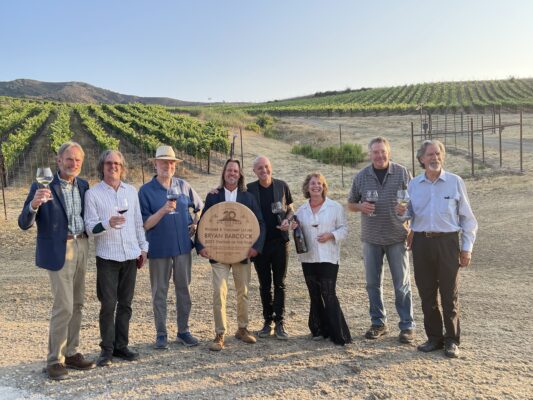 The Grand Tasting at La Purisima Mission found the many happy oenophiles sipping fine Sta. Rita Hills wines, snacking on tasty treats, and mingling with winemakers, growers, and guests on this last event of the 20th anniversary weekend. Any wine lover should run, not walk, to book a visit to the Sta. Rita Hills for next year’s Wine and Fire and many other lovely events in an area where the reflection of sea, land, and vines showcase best in the glass.